A Stolen Life, by Jaycee Dugard 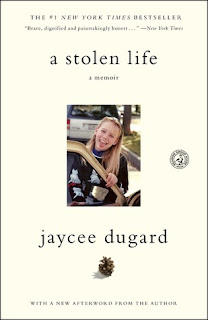 I’m more than a little tardy with this review having finished it over a week ago, partly due to being ridiculously busy but also because…how do you review a book like this? A Stolen Life isn’t going to be winning any Nobel prizes for literature, but it’s such a powerful book it seems churlish to down-rate it for any lack of literary flourishes.

When she was just 11 years old, Jaycee Dugard was abducted while walking to school. For the next 18 years, she was held captive in the ‘secret backyard’ of Phillip Garrido for his sexual gratification, birthing two daughters by the time she was 17 years old. Aided and abetted by his equally sick and twisted wife, Nancy (who not only knew that her husband was raping a child in their back yard but who also scouted girls for him), Garrido would somehow manage to avoid the scrutiny of the parole officers and other members of authority (he had previously been convicted of sexually assaulting a 14 year old) who not only managed to never take more than a quick peek around his property but also never thought to question the word of a convicted sex offender about who the fuck the little girls living at his house were (it seems I still haven't calmed down a week after reading this). It would eventually take him actually taking Jaycee and her two children into a parole office with him for the authorities to realise the identities of the girls and reunite Jaycee with her family.

Told in Jaycee’s own words, her story is not only harrowing and heartbreaking but also astonishing for the quiet strength that enabled her to not only survive her 18 year ordeal but to emerge still hopeful for her future and that of her children. Having had to educate herself in the years of her captivity, Jaycee has a very simple writing style which really places you in the shoes of her 11 year old self, with the jumbled timeline and interjections recreating her own childish confusion at what was and did happen to her and enabling the reader to understand how her dependency on Garrido for everything could make her afraid of his control being taken away.

While not an easy book to read, A Stolen Life is a very powerful one, and one I don't think I’ll ever forget.

Posted by TheShitWizard at 20:04 No comments:

Gossip From The Forest, by Sara Maitland

I've long had a fascination with the woods. For me, a large part of their appeal comes from how they spark my imagination (which is heavily influenced by the fairytales with which I grew up). Therefore feeling as though it was written especially for me, Sara Maitland's lovely book look at precisely these things - forests and fairytales - taking in their tangled histories and how they have inspired and influenced one another. 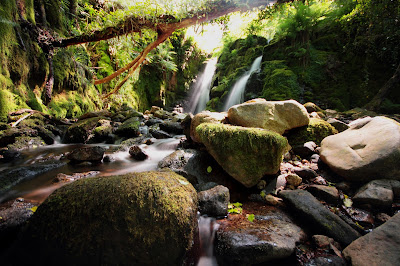 Above: Venford - just one of the magical spots that can be found in my, er, neck of the woods
(courtesy of NikNak - for more from his Flickr stream click here.

Each chapter focused on a different forest at a different time of the year, and a different element of forestry and fairytale theme. Reading during my lunch breaks, each felt like I'd just taken my own refreshing stroll through the woods (I also learnt rather a lot, and now can't stop noticing pollarded trees). Even better were the retellings of well known fairytales that ended each stroll and that showed each tale in a fresh light.

A delight nearly every step of the way (with a star deducted simply due to some editing mistakes present in my copy), I highly recommend Gossip From The Forest to any fellow nemophiles.

Posted by TheShitWizard at 18:43 No comments:

In Never Let Me Go we meet Kathy, a carer, as she’s brought into the orbit of two of her old schoolfriends, Ruth and Tommy, prompting her to look back over their shared past and to contemplate their futures.

It’s soon clear that Hailsham, the school where Kathy and her friends were reared, isn’t your typical school but one where the students have no contact with the outside world and are driven to create by art-obsessed teachers who are forever dropping little hints about how special the students are. It takes a little while for the students’ special purpose to become clear – and it’s a very interesting special purpose – but sadly I can’t say the same for the rest of the story.

Whilst I enjoyed the bits set at school as we watched Kathy and her friends grow up along with the slow drip of information that slowly reveals the truth of the students’ situation, I found that once this was revealed the rest of the story – with the late love realisation and attempts at deferrals (I won’t say of what for fear of spoilers) - a little pointless and even a bit dull, and I’d often find myself putting the book down for something more interesting to do in between chapters.

Having spent so long on the lead up, the last third of the book also felt a little rushed, despite me finding it boring, with the bulk of the important missing pieces being revealed in one big information dumping speech right near the end. While I was glad that this meant that the love stuff was over pretty quickly, I felt that some of the things brought up in this speech – such as how students at other institutions were raised, and how they’re seen by society – would have been made for a much meatier story.
Posted by TheShitWizard at 08:05 3 comments:

Email ThisBlogThis!Share to TwitterShare to FacebookShare to Pinterest
Labels: books

Love’s Curse is a fast-paced zombie adventure that had me wavering between 2 and 3 stars - it needed just a little more meat on its bones for me to really sink my teeth into.

Since the zombie apocalypse arrived, Justin and his friends have been sheltering in the fairly safe haven of a Post Office Sorting Office, venturing out only on food and supply scavenging missions. That is, until Justin receives a phone call begging for help from a girl he’s long pined for and, despite the protests of his friends (who don’t think much of Camille), is soon winding his way across the country to go to her aid – only what he finds when he arrives isn’t quite what he was hoping for.

While I was intrigued by the set-up and liked the pace with which the story was told (the action scenes were a particularly highlight – especially the one at the petrol station), I found the focus on Justin and the dynamics of his relationship with Camille to be rather restrictive. I would have liked to have known more about the zombie outbreak and Justin’s history with his friends – when did it start? Did society collapse all at once? How did he and his friends manage to survive? Are they bothered by what they’ve been through? How are their phones all still working? Was Camille ever an actual girlfriend? What is it he likes about her?

I must admit that I struggled with the dynamics of the relationship between Camille and Justin and, aside from not being clear why he liked her (other than thinking she was beautiful) and at the risk of sounding like a pretentious actor, I didn’t understand the motivations behind the actions of she and Vic come the end of the book. A better understanding of this, and a few more details on things other than those that affected Justin’s love life would have gone a long way to build a better picture of the world our characters were living in and helped bump up my rating.

Posted by TheShitWizard at 19:37 No comments: